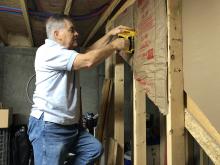 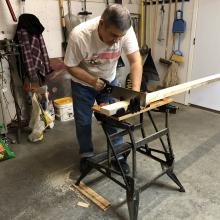 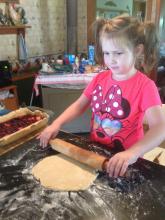 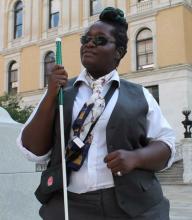 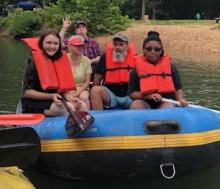 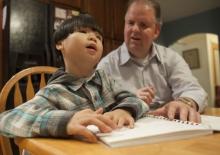 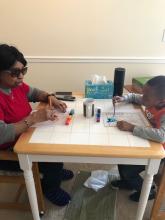 Blind / Individuals who are blind

This week we are giving a BIG shout out to our Madam President Shelia Wright, one of the newest board members of our national board. Here in Missouri, we know how wonderful Shelia is, and now she can share that with more of our federation family. Let’s see how she answered her interview questions.

One of the biggest pushes for equality we have done is take legal action against Uber. Thus, pushing drivers to not discriminate against individuals with guide dogs or service animals. Here is an article from our very own Blind Missourian on the topic.

Why Is the Current Uber Ride Share Testing So Important?

This article was originally published in the September 2017 issue of the Blind Missourian.

Since May 8, 2017, the National Federation of the Blind has been looking for testers to make sure that Uber is following the settlement reached with NFB in regards to guide dogs and the rights of their owners to have equal access to ride sharing vehicles. To that end testing is going to be done for the next three years with an option for an extension should it be necessary. As some of you know, Shelia Wright, our president asked me if I would be our contact person for the national office to help with this project. I agreed almost immediately because I am a very strong advocate for transportation and a strong advocate for ride sharing options in general. I know that the relationship with ride shares and dog owners has not been an easy one, and I know of more than one horror story from the past.  In fact, I was with friends one day and experienced the discrimination first hand; so, I knew it was real. That being said, I also knew that all of us, whether we were cane users or dog users, should have the option of being able to use the most spontaneous transportation option we have ever had at our disposal. I longed for a way to make this relationship better, and I truly wanted all my blind brothers and sisters to have the same access to something so freeing that I had.

Uber was a game changer for myself and Mark. In the past year and a half that Uber has been here, between Mark and myself, we have taken over 600 rides in St. Louis alone. This does not even begin to count the six other cities and five other states we have ridden in. In that time, we have seen good drivers and bad drivers, but overall our experiences have been positive. There have been times that we have had to use six to eight Ubers in one day to accomplish things that before might have been impossible to get done any other way.  Sometimes buses take too long, taxi cabs might not show up, and you cannot plan trips three days in advance to use paratransit. Sometimes you just need a car in your driveway and this is what ride sharing has given us. I know that it can solve a lot of problems for a lot of people.

Unfortunately, at first Uber and Lyft did not fully understand their obligation under the law to transport service animals and tried to say they were a technology company rather than a taxi service. Thanks to many people they finally began to understand that they are required by federal law to accept service animals into any vehicle for hire.  NFB worked very hard with both Uber and Lyft to make sure they fully understood their obligation to those with service dogs and that they hold each driver responsible for any denials. Slowly but surely things began to change.  Since the settlement with the National Federation of the Blind, Uber has worked diligently to change their way of thinking and to educate drivers on their responsibilities in regards to service dogs. Part of that settlement included the three-year testing period in which Uber is paying the National Federation of the Blind to run a testing program to ensure the needs of all dog users are being met.

That testing program is where each of us comes in. If we want to hold ride share companies accountable, then each and every one of us has an obligation to participate in the testing.  I am not just talking about dog owners, but I am speaking to anyone who rides with someone with a service animal. I am also not just talking about NFB members, but all of our friends and relatives who may not be Federationists, but have still experienced discrimination when trying to use ride shares. If we want to make sure these companies follow the law, then we have to be the eyes and ears that help to ensure that change has happened.

In the past year, I have heard many horror stories, but I have also heard people who have never even tried Uber say they will not use them because they won’t accept guide dogs. Well, while I understand their point it is important to remember that by not using them we are giving them exactly what they want.  We are not advocating for change, but letting these services off the hook. We have to be willing to be inconvenienced from time to time in order to make change happen.  Discrimination does not stop unless people are willing to step up to the plate and help stop it from happening. We have to stand up for our rights and be willing to be front and center in an effort to invoke change.

We have to look back and realize this is not just a ride sharing issue because there were issues with service dogs in taxi cabs way before these companies came about.  The funny thing is that back in those days taxi cabs might be your only option so no one ever said they would not use them because they do not accept service dogs.  We would fight, argue, and sometimes sue, but people kept on taking their service animals in taxi cabs. No one just walked away; we stayed and we fought, and over time things got a little better, but even today taxi drivers still refuse service animals. So, I have to ask you: how is this any different?  The only difference is now with ride shares we still have other options, but if we always take those other options nothing will change.

So now is the time to step up and be a part of the solution. NFB needs you to be a tester. It only takes a few minutes of your time to fill out the testing survey, and it will make a difference. Be a pioneer in the movement to make ride shares accessible for all. Don’t depend on other people to fight the battle; get out there and fight it for yourself and everyone else who uses a service dog. So please get involved, get your friends and family involved, and together we can make sure no one is ever refused service by a ride sharing service again. If you have questions feel free to email me at robynwallen@juno.com and in the subject line please put question on Uber Testing.

It has been said that to know where you are going ,one must know where they have been. Each Federationist has their own take on what is one of the greatest achievements that the blind community has done. Without a doubt,  one of the most important milestones in the history of the blind people’s movement is the creation of our beloved National Federation of the Blind. Did you know that Missouri was one of the seven states that founded the National Federation of the Blind? Let’s take a moment and learn about the early history of the national organization and our state affiliate.

Note: Martha Kelly also made a wonderful presentation as part of the panel presenting this topic but her remarks were not a part of this document. Hopefully her memories will be included in this or another issue of the Blind Missourian as she was the only person who was a part of both our first decade and 50th Anniversary.

This article was originally published in the May 2012 issue of the Blind Missourian.

Here is a summary of the presentation made on March 31, 2012 at our 50th Annual Convention in Kansas City. It has been submitted for two reasons. First, so there is a permanent record of our history and secondarily due to time constraints some items needed to be omitted from the discussion that day.

In the early twentieth century, the blind consumer movement was scattered and fragmented. Dr. Jacobus tenBroek had a vision for a nationwide consumer movement and brought representatives from seven states to Pennsylvania in 1940 to form the National Federation of the Blind. Missouri was one of those seven states.

Twenty years later however, all was not well. There were rumblings in the ranks. By 1957 a division began to form in the then Missouri Affiliate over the Blind Pension law, White Cane Week, vendor issues, and the national structure of the Federation . Then, in 1961, Alma Murphy, the president of the Missouri Federation of the Blind, was one of the dissenters who lead the formation of what became the American Council of the Blind.

But all was not lost in Missouri. George Rittgers, Gwen Phillips (later Rittgers), Cotton and Marie Busby, Jack and Martha Kelly, Bob Peterson, Ethel “Tiny” Beedle, and five more, all from Kansas City, did not side with the majority. George Rittgers vowed that there would definitely be a National Federation of the Blind in Missouri and here we are. Our first convention was held fifty years ago, November 16-18, 1962.

This is where we come in. We are the legacy of not only Jacobus tenBroek and Kenneth Jernigan, but also of George Rittgers and that group from Kansas City.

Now, even though there was still a National Federation of the Blind in Missouri, the battle was not over—not by a long shot. One of our first battles was over a very simple thing: our name.

You can read the rest of this article by visiting our public archive and searching for the May 2012 issue of the Blind Missourian.

National Federation of the Blind of Missouri
2023 Scholarship Program

61st. Annual Convention of the National Federation of the Blind of Missouri

It is never too early to plan.

I pledge to participate actively in the efforts of the National Federation of the Blind to achieve equality, opportunity, and security for the blind; to support the policies and programs of the Federation; and to abide by its constitution.

Select the link below to obtain your free item.

The National Federation of the Blind is seeking feedback from Uber and Lyft customers who have been discriminated against by either rideshare company because of disability, including but not limited to a rider’s use of a service animal or white cane, or inaccessible rideshare app technology.